*All of the information for this post was gathered from the sources listed below. Please use them for further reading on the subject.

The physical properties of a polymeric sample, such as density, ductility, and yeild strength, are all highly dependent on the amount of crystalline material (often called percent crystallinity) in the sample. There are two principal methods by which we are able to determine the percent crystallinity of a sample in the MCL: density measurements, and differential scanning calorimetry (DSC). Both of these methods compare the unknown sample to a fully crystalline or amorphous sample of the same polymer, and require the user to have some reference data. Additionally, DSC is a destructive technique, meaning that the provided sample should be one which is not necessary for further testing.

The most common method for determining the percent crystallinity of a sample involves comparing the density of the sample to the fully crystalline and fully amorphous densities. The MCL has an Archimedes Density Measurement tool which can be used in conjunction with a regular scale in order to determine the density of a sample. The figure below shows the proper setup for the attachment. 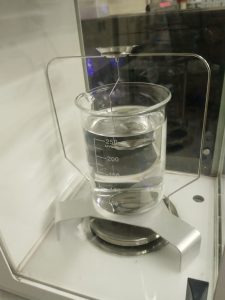 Along with these three pieces of data, you will also need to perform a few calculations. First, find ΔH21 using the amorphous sample’s specific heat capacity.

Once those values are calculated, they can be plugged into a final equation in order to determine the percent crystallinity by weight at room temperature.

The Measurement of the Crystallinity of Polymers by DSC