X-ray diffraction (XRD) is a powerful analytical tool for industry professionals and material scientists. A source (typically copper) produces x-rays which are directed at a flat sample. These x-rays are diffracted at certain angles by the crystal planes in the material and are detected at those angles. Based on the angles where many x-rays are diffracted, XRD can be used to determine the crystalline structure, and in some cases, the composition of a material.

One weakness of this method is that the source and detector are fixed in a single plane which is in-line with the sample. Many diffracted x-rays will scatter in out-of-plane directions and will not ever reach the detector. This is particularly true for samples with long-range ordering, such as single crystalline samples or other solid (non-powdered) materials. For example, the (111) peak in a silicon sample with a total peak width of 0.3° 2θ has only about a 0.3% chance of being aligned with the detector during a scan.

This struggle is often mitigated by scanning powder samples, which allow for all (or nearly all) orientations to be present in-plane with the source and detector. This, however, only works if the powders do not orient themselves preferentially on the holder. Powderization of the material is also not always possible for all samples.

The Bruker D2 Phaser has a rotational axis orthogonal (perpendicular) to the source-detector plane called Phi. Rotating the sample during a diffraction experiment brings the out-of-plane diffracted x-rays into alignment with the detector. Rotational scans can be used to detect peaks in single-crystalline samples, improve the signal-to-noise ratio of a scan, and decrease any broadening or asymmetry resulting from some preferential ordering in powdered samples.

To show this concept, and single crystal Si wafer was scanned both with and without rotation. As can be seen in the figure below, the rotated sample (red) showed a very clear (111) peak while the sample that lacked rotation (blue) showed no noticeable peak. This particular scan was done at a speed of 5 phi rotations per minute.

In single crystal samples, peaks tend to be very thin, and rotations that are too fast or step sizes that are too large risk “missing” the desired peak or distorting it significantly, making it harder to refine. The following scans were done on the same single crystal (111) Si peak, at different speeds of rotation (1, 2.5, 5, and 10 rotations/minute) and time per step (0.25, 0.5, and 1 second/step). 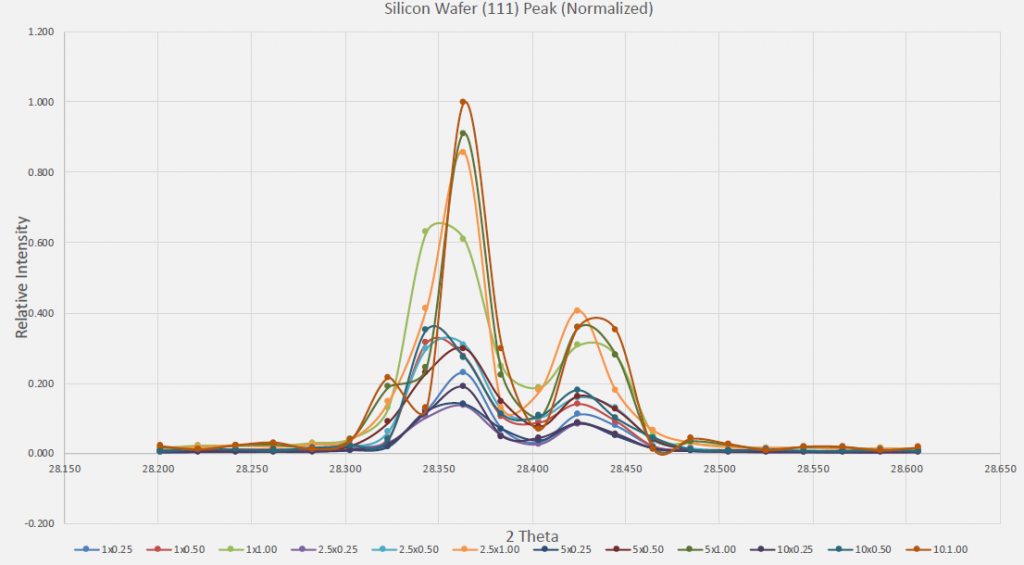 Good quality peaks are typically defined by their full-width at half-max (FWHM) and signal to noise ratio (SNR). A small width at half of the maximum height of the peak (a small FWHM) is ideal, as it allows the user to identify the exact location of the peak with more accuracy. It also usually minimizes asymmetry in the peak, making it easier to refine. The figure below shows that time per step was more significant to FWHM than speed of rotation. 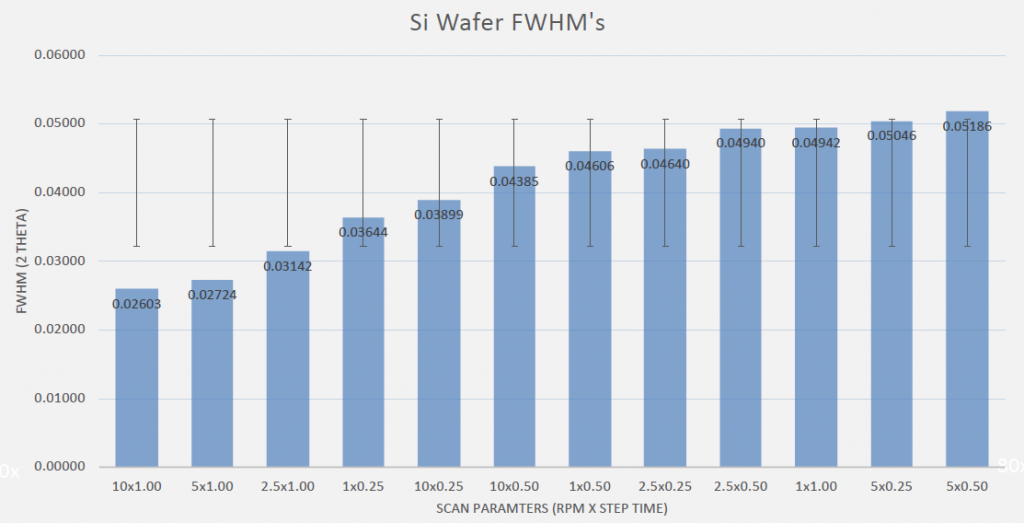 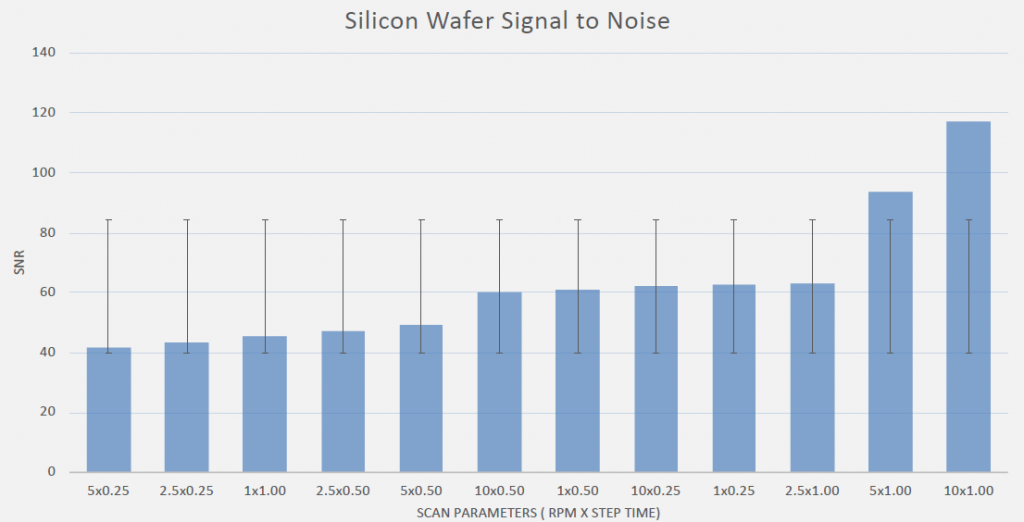 The above figures, when taken together, show that time is more important than the speed of rotation, but that some amount of rotation is necessary to capture all x-rays diffracted from a single crystal.