Surfaces vary in multiple ways. For example, surface pores can vary by size, depth, and location. Various techniques exist that analyze the surface of a material, most of which rely heavily on the understanding of the existence of micro an mesopores. Micropores typically have a size of 20 Å, while mesopores typically range from 20 Å to 500 Å. While mesopores are significantly larger than micropores, they are nonetheless important in understanding the full capabilities of the t-plot method, which can determine the surface area and pore volume of a sample.

The Micromeritics 3Flex is capable of performing tests using the t-plot method. Gaseous nitrogen adsorbs onto the surface of a sample at liquid nitrogen temperatures, and the 3Flex measures the adsorption uptake at various pressures. From this process, a graph is produced, called an isotherm, that can be analyzed to understand pore volume and surface area. For the t-plot method, this is accomplished by comparing a reference adsorption isotherm of a nonporous material having the same surface chemistry.

In the t-plot method, a t-curve is plotted which graphs the average thickness of the adsorbed layer on the surface.

into the average thickness of the film adsorbed on the surface to produce a t-curve.

In order to achieve a t-plot, the average film thickness is then converted to volume adsorbed using the following formula:

Upon calculation, the value for the volume adsorbed is plotted against each pressure point. Once the t-plot is achieved, surface analysis can be performed using the graph that is produced. An example t-plot can be seen in the following figure: 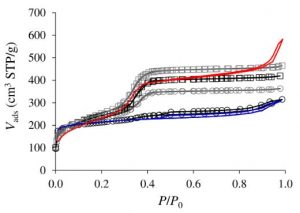 While this method has been proven to be accurate for microporous surfaces, the method is less accurate for mesoporous materials. The calculations above assume that the thickness of the adsorbed layer is not independent of the pore diameter. With mesopores, the thickness is independent of the pore diameter, so the formula may fail.