Many scientific applications of thin films, thermal and optical coatings, conducting oxide layers, as well as many other systems, require analysis of reflectance, absorption, and transmittance of electromagnetic radiation; specifically visible light and near-visible radiation. Here in the Materials Characterization Lab at the University of Utah, we utilize the Perkin-Elmer Lambda 950 UV-Vis-NIR Spectrophotometer for optical analysis.

One of the versatile accessories of the Lambda 950 is the Universal Reflectance Accessory (URA). The URA measures reflectance, and therefore absorbance assuming no transmittance, at incident angles ranging from 8° to 68°. This can be particularly useful when the specular reflection of a coating or film is the property of interest. The integrating sphere, most commonly used for sample reflectance,  measures optical properties when the radiation is normal to the sample (at 90°). However, many real-world applications — such as charge conducting films on solar cells or anti-reflective coatings — need to be analyzed for specular reflections throughout the day as the sun radiates at a wide array of incident angles.

Use of the URA

To demonstrate the capabilities of the URA, a thin film of chromium which has been ionic vapor-deposited on a glass substrate was measured at several different wavelengths and incident angles.

The URA is capable of collecting data with any method available with the UV-Vis, as explained below:

The wavelength or time drive programs are the best choices for the URA. Due to a large number of internal mirrors, a scan program takes an excessive amount of time as the mirrors require adjustment for each wavelength through the range.

Once a program is selected, the user must then design the sample table. The sample table will control the operation of the UV-Vis through the test program. The table can be edited by selecting the “Format Table” option. Under the design tab of this dialogue box, the user defines what angles of incidence are desired for the test and whether to sequence the program by measurement or sample. If only one angle is required for multiple samples, sequence by sample. If multiple angles are to be scanned, whether for one or many samples, sequence by measurement.

Below is a wavelength program as applied to the chromium film at four different wavelengths: 400 nm, 500nm, 650 nm, and 780 nm. Data points were taken at 8° then incrementing up by 5° from 10° to 65°. The results shown in the graph are a great illustration of why the incident angle measurements provided by the URA can be helpful. The shorter wavelengths shart with a low %reflectance which increases as the angle of incidence approaches normal (90°). The opposite holds true for the larger wavelengths. This could show varying effectiveness of the chromium sample depending on the application, which would not be shown by a direct reflectance analysis. 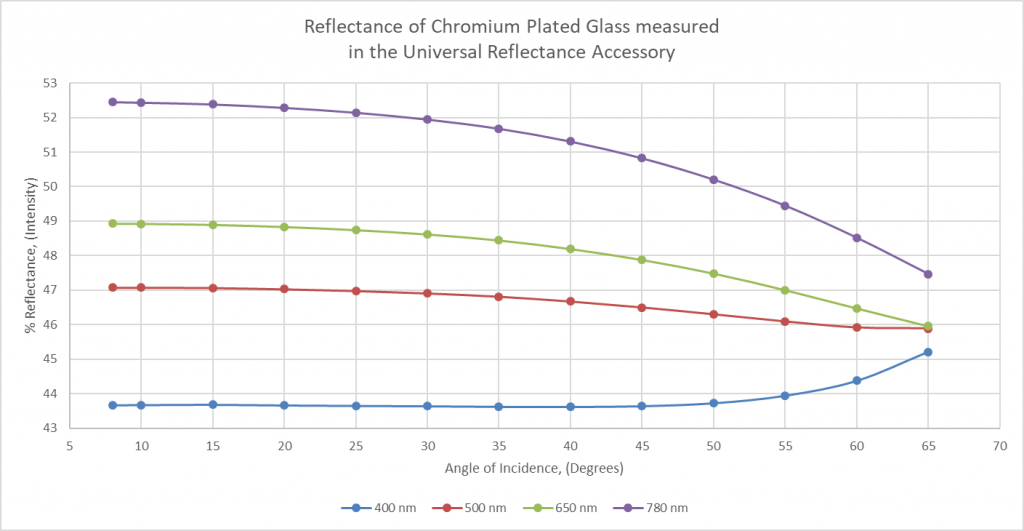